When the driver doesn’t show up, well- things get a little more complicated.  I need to be more alert because having kids in the car mean that I NEED to be extra careful. Another thought was – of all days, it had to be a Friday – when we have two cars on coding.  Wonderful!  I was going to use my car (that was coding too!), but guess what – the gas tank was almost empty.  So I had to use the other coding car, in my head was BAHALA NA SI BATMAN! 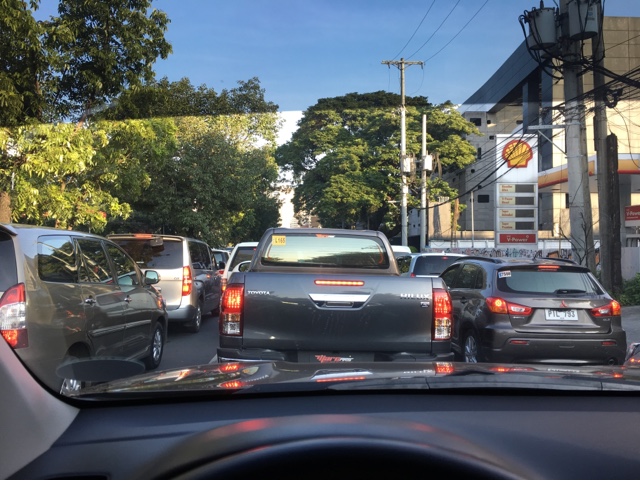 So there, I drove to our carpool mate’s house and had to ask Kailee to sit in the front primarily because one of the kids who carpools with us has motion sickness, so her yaya needs to be on a alert that she might – throw up!  So two kids at the back with the yaya and Kailee in front of me. Usually, when there’s a driver – I pray my morning Rosary and Divine Mercy prayers on the way.  But this time, I didn’t have time anymore – I had to focus on the driving.  I actually timed myself – to see if I did a better job behind the wheel or just as a passenger. One observation on myself – I am very impatient on the road.  I hate those oh so slowly moving vehicles that don’t have a care in the world that they’re causing build up.  Argh – but I had to be extra patient since, I was shuttling three kids! I guess during the morning traffic near school – drivers get a little bit competitive on who goes first and who needs to be given way.  I most of the time feel that traffic enforcers do more harm that good – but when we’re talking about the pride of Filipino drivers, well – it’s damn if you do and damn if you don’t.  I was lucky that this morning’s traffic was a bit bearable.  It was only when we reached Gate 9 of XS that things got a bit tricky. Since I had a little boy to drop off at XS’s Gate 9, I had to be creative yet not cause traffic.  Well, lo and behold this car in front of me.  They were taking their sweet time – I think their little boy in the car was still putting on clothes.  My GOODNESS!  I really dislike inconsiderate people.  There are so many cars lining up behind me waiting for me to move and this car REFUSES to move!  I had to call the attention of the security guard to let the car move, but you know what the guard said *Ma’am atras nalang po kayo, aalalalayan ko po kayo* Sheesh!  So as a good citizen, I did what was suggested.  As I drove passed the car infront of me, I was correct, the little was was still dressing up.  The driver was I assume his dad, and he had his eyes CLOSED!  Talk about entitlement.  It was a no parking zone yet he was there – stalling, what kind of an example is that? I teach my children to be mindful of other people, that they should be aware of their surroundings and the people around them.  I feel a bit irritated that I teach my kids this while other continue to feel entitled.  Maybe I shouldn’t teach that to my kids anymore – argh!!  It is so very very hard to be merciful and compassionate to people if they don’t even have an ounce of consideration for others.  Nakakainis!  Just because of this – I missed a few crucial seconds.  I say crucial seconds because they really matter in early morning school traffic. So anyhoo – I got home by 7:10am, not bad I think – I just matched the morning driver’s record!  Hahaha.. How’s your morning been? Happy weekend!