Above and beyond is what I can say about my recent stay at The Excelsior Hotel.  The hotel really made our stay very comfortable and special.  I don’t think I remember any other hotel doing this to us in the recent years. The Excelsior Hotel has been our go-to hotel when I was still young.  My mom would always pick this hotel or The Park Lane when we were younger.  My brother and I have memorized the streets of Causeway Bay like it was Manila because of our frequent stay here.  It was only when the rates went up and cheaper hotels sprouted that we stopped staying at The Excelsior.  I honestly think it has been more than 15 years since I last stayed there.  It was only last October 2016 that I was able to stay there again.  The lobby, the elevators, the hallways and the room looked the same, it was exactly how I remembered it to be.  All the memories came rushing back – the old World Trade Center mall, how it was a smaller shop then and the small restaurants that filled the streets.  Only the streets were different, everything else was the same. When I emailed the hotel directly to reserve a room, I informed them that we were arriving earlier than the check in time, they replied saying they will try their best but cannot guarantee it.  During our stay in October of last year, they were able to give us a room immediately.  I was secretly hoping they’d do the same. Our check-in was a breeze, I think because it’s early in the morning – and also, I just learned that Good Friday, Black Saturday and Easter Monday are official holidays in Hong Kong.  My friend Cubie told me before that most Hong Kong-ers go out of Hong Kong when there’s a long weekend.  But last weekend, it was the HKTDC’s Electronics Fair Spring Edition, and that was my Panget’s main purpose. At the check-in counter, I was kidding with the staff to upgrade our room, he apologized and said there were no upgrades.  After a few clicks, he smiled and said a room was available for us right away, I was really happy since I wanted to freshen up before going to the exhibition.  He also said right after handing the card keys to me *Oh, we’ve also upgraded you to a harbor view room*, I was ecstatic!  I have long wished to have a harbor view in all of my hotel rooms in HK, but I think it happened just a few times when I was younger, we mostly got city view rooms. This was what greeted us when we entered the room: 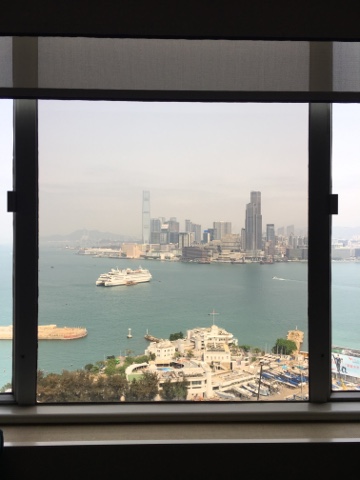 I was floored – it was a REAL harbor view room, it wasn’t a semi-harbor view room, it was a LEGIT harbor view.  My Panget caught me smiling and I was just staring at the view.  The room looked really different too!  I mean compared to our room last October 2016.  This room had a bay window (I learned of this bay window from watching Peter Pan the cartoon!  Wendy always sat there when she looked outside).  I think I spent about 15-20 minutes sitting there and admiring the view.  I can’t explain it, but it was such a magical moment for me.  My Panget was laughing at me saying how *babaw* I was, I didn’t care – I loved the view, I really loved it sooo much.  So you can just imagine, I would spend my morning having breakfast inside the room – looking out the window.  I don’t think we even opened the TV in the morning. 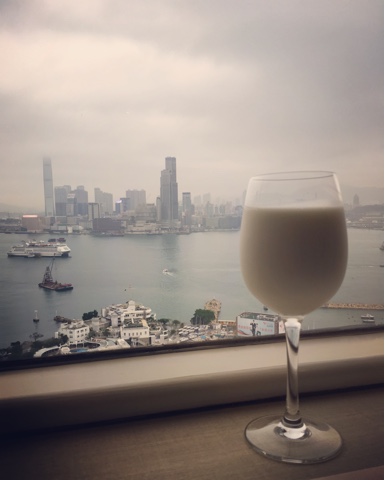 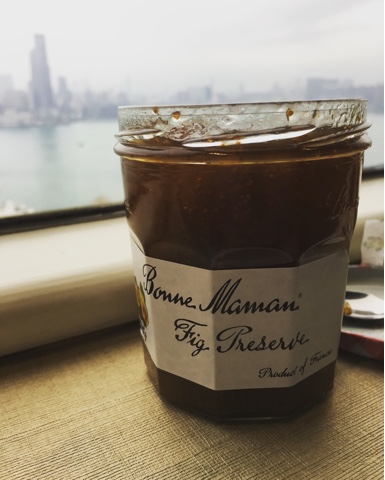 I was also glad that they’ve renovated the rooms.  The rooms are more modern now, the colors are softer on the eye and the furnitures, are more practical.  The bathroom stayed functional as it needs to be.  The hallways are more brightly lit and I loved the new scent of the hotel. On our last night, we were surprised to see this.  We were also given complimentary white wine. 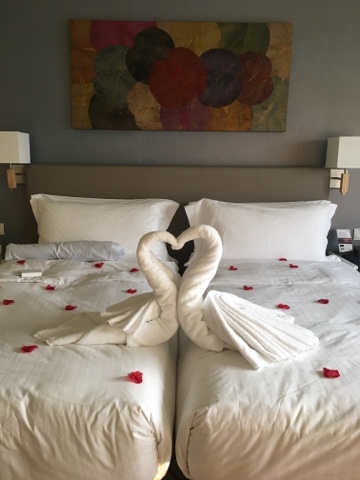 Did we look like lovebirds to the staff?  Hahaha!!

After packing, I called the Front Desk wanting to ask for a late check out.  I was merely hoping for a 1pm check out since that’s the usual leeway that most hotels give.  After a few seconds of hearing clicks here and there, the Front Desk staff told me *Sure, we can extend your check out time to 3pm*, I had to ask again, and I did because I wasn’t sure that I heard it correctly – and I did hear it correctly, it was at 3pm – 3PM!  Wow!  The person I was speaking to told me, *since you’re flight is at 6pm, we’d be glad to extend it to 3PM* This is the FIRST TIME EVER that a 3PM check-out time was extended to me in my lifetime.  I was floored.  I guess my Panget heard the surprise and enthusiasm in my voice that he asked why.  So I told him that we extended till 3PM to check out.  He gave an impressed laugh, I guess he was also surprised.  Hahaha! We were smiling to each other saying, that the staff has gone above and beyond.  We were really impressed.  We really didn’t expect anything out of the ordinary for this stay, but we were amazed, surprised and impressed with the kind of service that was given us.  We felt genuine warmth and hospitality during our stay. Thank you The Excelsior Hong Kong, you’re unforgettable.