Last Friday, I made a post on my love hate relationship with Smart.  I also said that I would update the post, but instead of updating – I thought of just making a new post on my experience.

To be honest, I was expecting to be shut down.  I have been shut down by Smart a couple of times when I complained of their interrupted and non service days.  So with my recent complaint, I just wanted to vent out.

I exchanged messages via DM with #SmartCares on twitter.  I was frustrated most of the time because it seemed they didn’t read through my messages.  I had to repeat and send the messages again for them to understand my situation.

But yesterday afternoon, I finally got through to them.  This was their reply to me. 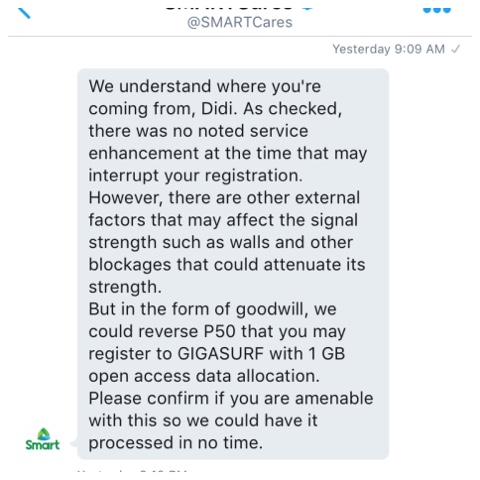 I was honestly so surprised and happy at the same time.  I never expected a telco to give back what they took.  In all seriousness, I am still in a bit of shock.

As of the moment, the P50.00 has been credited already.

May I just say?  I think Smart is really the better telco in the country.  It’s just unfortunate that most of the people I call and communicate with are with the rival network, thus my decision to stay with the rival telco.  Someday, I wish I can have the courage to switch.  Someday.

Thank you Smart, you really care.