I have said it before that the only reason why I wish #JaDine remains REEL is because I love them together.  I selfishly wish they do not get paired with other actors.  I am also selfish because I don’t want them to have problems, like REAL couples do.

Look at Clark and Leah – their journey towards finding love in one another wasn’t easy.  It was filled with trials and heartaches.  And I don’t want #JaDine to experience that.

Right before the concert ended – #JamesReid said – in front of a sold out crowd at the Araneta Coliseum that he LOVES Nadine.  If he was a good actor or not, I didn’t care anymore – because it felt and sounded very REAL to me. 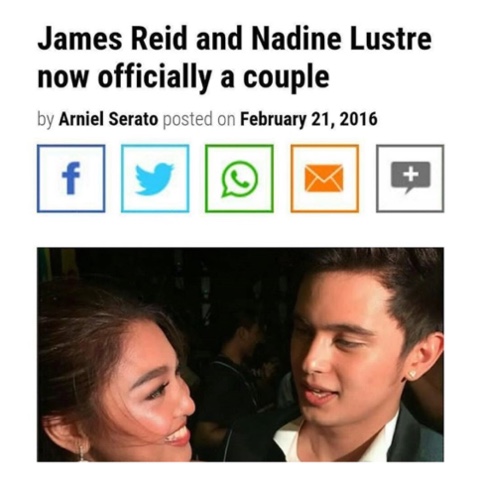 Even if I do not want them to be REAL for selfish purposes.

I am very happy for them.  Truly. Hahaha!!

Finding love in the entertainment industry is not easy.  Since it’s reel – one might need to distinguish what is reel from real.  But I guess being paired together for nearly 2 years, it happens.

I admire them both for coming out – admitting in their concert that they’re truly #JaDine now.  REALly #JaDine.  It’s unusual to be honest that a showbiz couple, most especially a LOVE TEAM to *admit* to the fans and the boses – that they’re truly together!  But its something admirable and honest. Sharing it to the fans who love and support them, really means a LOT.

So there you have it – #JaDine is officially #JaDine – a REAL couple.

Who would have thought that doing a teleserye together as friends will end up being the tool to realizing that they’re perfect for one another after all.