When you say Lotte, it’s automatic that it’s Korean.  I learned this in the 90’s when my mom and I went on a mother daughter trip.  I remember seeing a huge skating rink – and during that time, it was the height of ice skating in Manila because of Megamall’s ice skating rink in building A.  I remember my mom buying me a pair of white ice skates.  I loved them very much to the point that I never used them.  I just opened them, admired them, held them, wore them and pretended to skate in my carpeted room.  Hahaha.. I never did lessons.  I honestly, don’t know where my skates are now, but wherever they are, I wish them well.

So when my Panget planned a trip to Korea, well – he mentioned going to Lotte World.  All those memories of my *once* white ice skating shoes came rushing back.  Hahaha!!  I honestly don’t have any recollection of what the place looked like.  When my Panget said it was far, I didn’t believe him – I mean, I knew it was in Seoul, so for sure it wasn’t that far.

When I used Google Maps, I was surprised to see that the travel time is 48 minutes!  I thought to myself, was it THAT far?  I didn’t think so, I didn’t want to believe it.  So the night before, I already tried looking for a train route, well the fastest train route.  There wasn’t any, the fastest was 38 minutes – I guess, Seoul is really a big city and Lotte World was really far from where we were staying.

Since Lotte World opens at 10am, we decided to leave at 9:30am – we thought that was more than enough time.  We didn’t want to leave too early too.  So we started our journey to Lotte World.

Waiting for the subway/train in Seoul takes time.  It wasn’t unlike in Hong Kong or Japan, that the trains were arriving every few minutes.  We found ourselves waiting for about 5-8 minutes for the train to arrive.  And when it did, we had to wait a few stops to change trains.  In total, we had to change about 3 trains.  In theory – well, it was fairly easy right?  Wrong!  Changing lines in Seoul did not mean just walking across the platform.  It meant leaving that platform and walking about 3-5 minutes up and down the stairs to get to the right platform.  When you think about it 3-5 minutes is quite short, but when you actually do the 3-5minute walk with strollers and going up and down the stairs, well – it’s not as easy.

We got to Lotte World at 11am.  What we thought was only 38 minutes progressed to 90 minutes because of the walking and waiting for trains to arrive.  I guess, it was really far – well commuting via trains, that is.  We then decided to have a quick lunch before entering Lotte World. 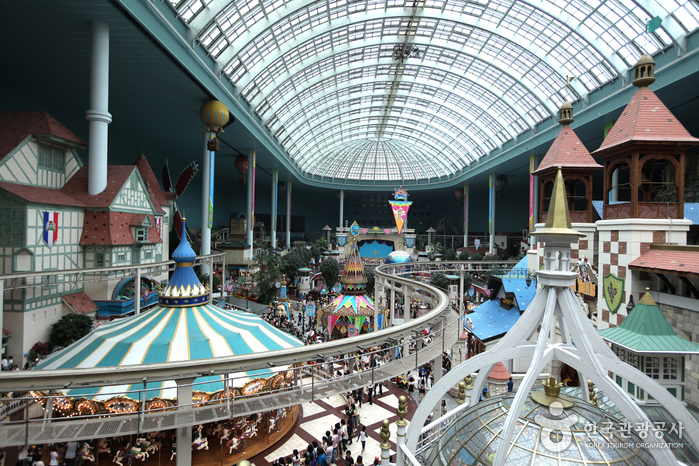 Image grabbed from THIS site

I honestly couldn’t imagine what an indoor theme park looked like.  In my head it seemed odd, but when I saw Lotte World, I realized that it was a small theme park that was enclosed in a mall.  It was impressive because there was a hot air balloon ride that was hanging from the ceiling.  Imagine the magnitude of this enclosed mini theme park.  Lotte World is really for kids – I didn’t feel very excited (like I felt when we went to Disney Sea) I wasn’t as excited but the kids were.  We rode the carousel, did an almost VR ride, the hot air balloon and the kids did this.  Watch Connor closely.  This is the first time the kids did rides without adults.

My Panget, Yaya Belen and I were laughing sooooo hard!  The good thing was that –  Connor enjoyed the ride.  I was fearing that they’d cry!  Hahaha.. Lotte World has an indoor and outdoor theme park.  The indoor is mostly for kids, the outdoor is for older kids and adults.  The lines were long and I wasn’t keen on waiting for a ride.  We spent a good 15 minutes just walking around.  The kids were quite bored at the outdoor park because they all saw rides for bigger kids.  There were two rides for kids, but they were closed. So when we decided to leave, we had to go back to the indoor park, as the subway station was below it.  While walking to the subway station, I spotted a caricature artist.  I remember when I was younger, we had our own – but it was in Japan!  Hahaha.. So I told my Panget that I wanted the kids to have one made.  Kailee willingly obliged while Connor, he wasn’t too happy with it.  Connor has issues of seeing people draw him, he feels they are all ugly!  Hahahaha.. So here are the caricatures.  These cost 10,000KRW + 4,000RW for laminating.

What do you think? Hahaha!!