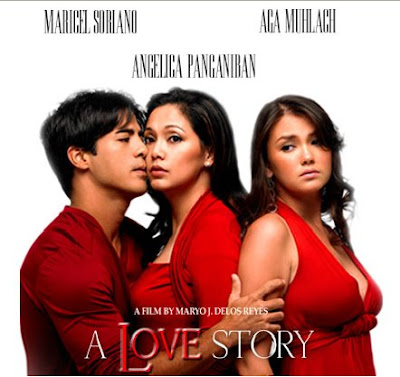 I’m such a fan of Tagalog movies! I especially love the Christmas holidays here in Manila because of the MMFF – Metro Manila Film Fest! You can ask my Panget and my friends about it – they’d snicker and say that I really do love Tagalog movies.

Okay, so yesterday – I woke up early – to watch ‘A Love Story’ with my best friend KC at Trinoma. We decided to watch it on its first showing which was 1230pm so we can do some other stuffs in the afternoon.

The cinema was not so full – but acutally – when I think about it – I think for a Sunday morning – and since the movie has been shown for about 2 weeks now – it was still quite full! Anyhow, most of those who watched with us were – women!! Hahah.. I know..

The movie was nice. I liked it! I mean I liked it. It was a different type of Tagalog movie. They say that for a Tagalog movie – when you get to see the trailer on TV – that’s it, you’ve seen it all! But with this movie – I was curious – who was the wife and who as the other woman? The movie kept us guessing for the first 40 minutes. I was really confused on some parts but eventually – all the questions were settled one by one.

At the end of the film, KC shed a few tears – while I – did not shed a tear. That was what’s odd about it – I’m the crying type – the one who’s luha is mababaw.. I told KC that I felt more sympathetic towards Maricel Soriano’s character – and she told me that she did too! When I met another good friend that night – I told her my insights and she told me that the reason I felt that way was because I was not married yet. Sabagay – what she said was true..

But in fairness – the movie was great. I’d love to watch it again. I hated Aga for cheating. Men!! Hahaha.. JK – but seriously – like what Kate Hudson said – men are by nature NOT monogamous…

What I liked about the movie:

What was not believable for me was – on the last few minutes – Angelica and Maricel’s character bump into one another in a bakeshop and they’re all smiley and chatty ( a bit) that seemed really odd. I mean, ok fine – they were in good terms, but if I was Maricel or Angelica – a smile would be enough. But that’s just me!