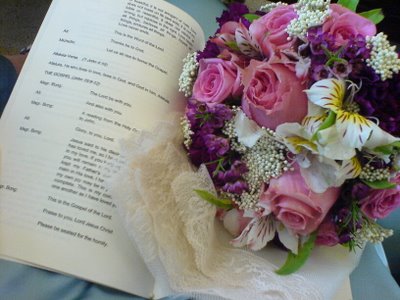 Last Saturday, was my cousin’s wedding. She was the first one in the family to get married! And so I think everyone was excited. We were never actually close, but we had a connection, maybe because we went to Beijing together, and because of that – there was a bond formed. I can’t explain it but she’s someone I really treasure. Her presence was the one that kept me sane during the one semester I spent in Beijing. If I felt homesick – I’ll just send her a text message and when she’d reply – I felt better.

I was surprised that she included me in her bridal entourage, but at the same time I was happy that I was going to be part of it! Since she was the first in the family to get married, it was the first time in years that I was part of a relative’s bridal entourage. The story of me finding out that I was part of it was kind of funny. The designer, who is the groom’s sister and I also became friends because of Beijing, we bumped into one another in Manila Penn, a few weeks after my cousin’s engagement party – she told me to come to her shop so they can get my measurements. I asked her why and she replied that I was part of the entourage. I argued that I wasn’t! Because in the first place – I wasn’t told that I was part of it! We argued for about 2 minutes, she said that she saw my name listed on the paper with the whole entourage, then she finally told me to just go to her shop because she had a meeting at that time. And so I waited for my cousin’s text – I didn’t want to pre-empt anything. My cousin finally texted me, a few hours later that I was indeed part of the entourage. Hehehe…

Yesterday, I was at their Makati Shangri-La suite at 11:00am, I joined them for the hair and make-up. My cousin vouched and said that her make-up artist Madge Lejano was really good and what’s better was that the stays until before the reception for re-touch. I always thought that make-up artists would just do their thing and go running off to the next one. Madge is really nice – she helps out in every way she can, which is perfect right? She stays behind, watches the wedding ceremony, stands by just in case she is needed, she waits until her bride leaves the church premises and goes to wherever she is needed. Her team is also magnificent! Her hair stylist A – is goooooood!! He does magic, he did something to my hair – he’s really good! 🙂 To my surprise the aircon inside Sanctuario de San Antonio was really cold! I don’t think there was anyone who sweat during the whole ceremony!! I remember when I was young, I used to go to Church at on Sundays when I slept over my ama/grandmother’s house. It looked to big and grande! Then just last year, when I attended my Panget’s brother’s wedding – the place looked smaller, but just as grande. The ceremony was beautiful because the officiating priest is someone close to the couple. The Homily was really nice, it was short but really meaningful. I say this because the last wedding I attended – the priest was singing his heart out in with every phrase he could associate a song to!