I have been craving for cupcakes since I last visited Cupcakes by Sonja after Market Man’s eyeball. Christine suggested that I make my own concoction to suffice my craving – a good idea? – Brilliant! And so I searched the information super highway for recipes for a good cupcake. I searched and searched till it dawned on me that I was looking for the wrong kind of recipe. Since I was craving for Sonja’s cupcakes – why not try and search for the Magnolia Bakery’s original recipe! When I hit the search button – the results were alarming! There were numerous sites that were giving away the recipe, the famous bakery even had it’s own cookbook for sale in Amazon!

Thus – I copied 2 recipes. Both recipes asked for self-rising flour, what in the world is that and where will I find such? I sent an SMS to my good friend Jen and my Panget’s sister-in-law. They both told me to make my own self-rising flour, since the recipe called for 1-1/2 cups self-rising flour I just needed to add 2-1/4 teaspon of baking powder and 3/4 teaspoon of salt.

I started measuring for the ingredients after eating lunch. It was just then that I found out that I was missing an ingredient! I thought I had baking powder on hand – but it turned out to be baking soda! I had to ask the driver to buy me baking powder! Thank goodness the driver was there!!

Yesterday was also the first time that I used my brand new Kitchen Aid mixer (thanks to my Panget’s brother and sis-in-law – they bought and brought this home for me from the US, they got it for such a good price!) That mixer is so incredible! When before, I slaved with a handheld mixer – now I can just stand aside and look in the mixer while it blends all the ingredients perfectly. What a time and energy saver!! 🙂

I followed the recipe to a T. And the result – well, I was disappointed. There was defintely something wrong with the cupcake (but I couldn’t figure it out!), it smelled and tasted too egg-y (for me), the frosting was too sweet too! My Panget on the otherhand was satisfied – but commented on the sweetness and that he wanted a cupcake with a more bite to it. I made another mistake – I know most bakers will make me sabunot for this – I put the frosting too early, while it hasn’t been totally cooled yet – I have my reasons! My Panget wa 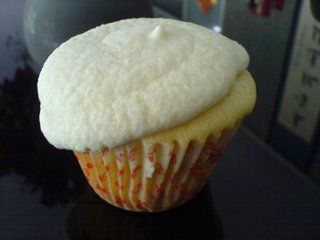 s pressuring me to move faster! (he saw and watched me bake, for the first time.. Hehehe 🙂 But seriously – I was too excited to tasted the whole thing. Next time, next attempt – I’ll make sure it’ll turn out to be better than this. I’ll have to figure out a way to make the icing less sweet.

– Pre-heat oven to 350 degrees
– Line two 12-cup muffin tins with cupcake papers
– In a small bowl, combine the flours. Set aside.
– In a large bowl, on the medium speed of an electric mixer, cream the butter until smooth. Add the sugar gradually and beat until fluffy, about 3 minutes. Add the eggs, one at a time, beating well after each addition. Add the dry ingredients in three parts, alternating with the milk and vanila. With each addition, beat until the ingredients are incorporated but do not overbeat. using a rubber spatula, scrape down the batter in the bowl to make sure the ingredients are well blended. Carefully spoon the batter unto the cupcake liners, filling them about three-quarters full. Bake for 20-25 minutes, or until a cake tester inserted in the center of the cupcake comes our clean.
– Cool the cupcakes in the tins for 15 minutes. Remove from the tins and cool completely on a wire rack before icing. At the bakery we ice the cupcakes with either Vanilla Buttercream or Chocolate Buttercream.

– Place the butter in a large mixing bowl. Add 4 cups of the sugar and then the milk and vanilla. On the medium speed of an electric mixer, beat until smooth and creamy, about 3-5 minutes. Gradually add the remaining sugar, 1 cup at a time, beating well after each addition (about 2 minutes), until the icing is thick enough to be of good speading consistency. You may not need to add all of the sugar. If desired, add a few drops of coloring and mix thoroughly. Icing can be stored for up to 3 days in an airtight container for up to 3 days.

The cupcake recipe makes about 2 dozen cupcakes – depending on the size. I have about 5 more left – any takers? 🙂 The vanilla frosting however is too much for 2 dozen cakes! I still have some stored in an airtight container (I used the Tostitos Salsa container)

Any advice on how to do it better on my next try? 🙂