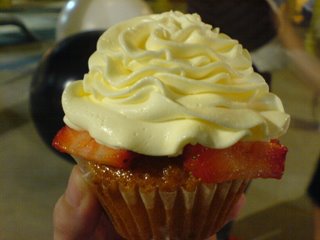 Berries and Cream
Cupcakes by Sonja
Serendra, The Fort

Since we were at The Fort last Saturday night – my friend Jen, my Panget and I went on ahead and took a look at the Serendra. I’ve been there before – but during the day. I had lunch there with Gracie a few weeks ago (or was it already a month ago?) Jen and my Panget wanted to see the Cupcakes by Sonja store. Since they’ve been hearing so many things about it – might as well see what the fuss is all about right?

Good thing there weren’t that many people. We were able to find parking instantly! We then headed down to the store. It was brightly lit – and full of people. Well, mainly because the store is not very big. When we entered the store, I immediately asked if they had Berries and Cream, this I was told was made of fresh strawberries, since I love strawberries – I had to give it a try. And so I did. I was lucky enough because they had only one piece left. Galing noh?!

When Sonja Ocampo handed me the cupcake – she told me that if she put it in a box – it might get ruined, better that I eat it immediately. The first thing I noticed was the slices of strawberries hidden underneath the icing. The cupcake smelled wonderful! Absolutely divine! It was too pretty to eat! Jen and my Panget told me to take a bite – but I hesitated at first, but when I did – it was wonderful. On the way home, I held on the cupcake – I didn’t want to take another bite because it smelled delicious – but in the end, I had to eat it all.

One complaint though – the price is just too steep for a piece of cupcake. Imagine Php75.00 for a piece? 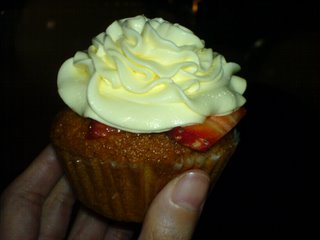