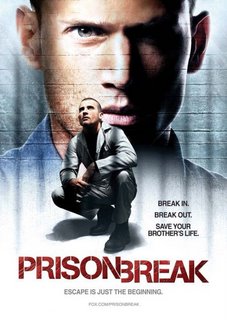 You should hear that line being said by Michael Scofield of the new series (na kinalolokohan ko) Prison Break. It was to die for!! Super kinilig ako, I swear!!

PRISON BREAK – is the latest series that I am obsessed with. I already saw the WHOLE first season – which consists of 13 episodes. Kinda short huh? But hell, it was worth all the late night watching! I finished the series in 2 days! Considering that I bought my copy just last Saturday afternoon! And by last night I was done!!

The series involves a number of characters that you won’t usually see together (given that they’re out of the walls) – there’s a theif – Sucre and C-Note, a pedophile – T-Bag, a mobster – John Abruzzi, a notorious hijacker/theif – Charles Westmoreland aka DB Cooper, a death row inmate – Lincoln Burrows and a thief/structural engineer – Michael Scofield. These are working together for a common goal – that is to break out of prison. And who’s idea is it?? The brilliant engineer of course!! The main man, Michael Scofield!

I love you Michael Scofield!! I love you even if you’re inside the prison! I will break you out! Hahaha…:)